The story behind Palju sõnu

The melody of Palju sõnu (Many words in Estonian) was written down by 20-year old Juhan (Johann) Aavik (1884-1982) during his expedition to South Estonia in 1904. At that time, he was a third-year trumpet student at the St. Petersburg Conservatory which he graduated in 1907, after which he continued his studies in the composition class. Aavik later became a renowned Estonian composer and conductor, a versatile promoter of music life and pedagogue, founder, director and professor of the current Heino Eller Tartu Music College, and later also the rector of the Tallinn Conservatory of Music.

At the same time, at the beginning of the 20th century, Oskar Kallas, who later went on to found the Estonian National Museum, organised a systematic collection of folk songs with the help of the Estonian Students' Society. In order to carry out this process, students of music schools, including those at the St. Petersburg Conservatory, were given scholarships to annotate and record Estonian folk songs, including their melodies.

Thus, several young students who later became famous Estonian composers and musicians joined these trips collecting folksongs, including Juhan Aavik in 1904. On July 23rd, he arrived in Taheva, near Hargla, Valga county in South Estonia. There he met the Hargla pastor Tamm, who, upon hearing about the purpose of the trip, received him very warmly, offered him accommodation and accompanied Aavik everywhere in the following days. Aavik writes that he always tried to ask a person familiar with the surrounding people to join him since without a companion, it would have been very difficult to gain the trust of the singers. 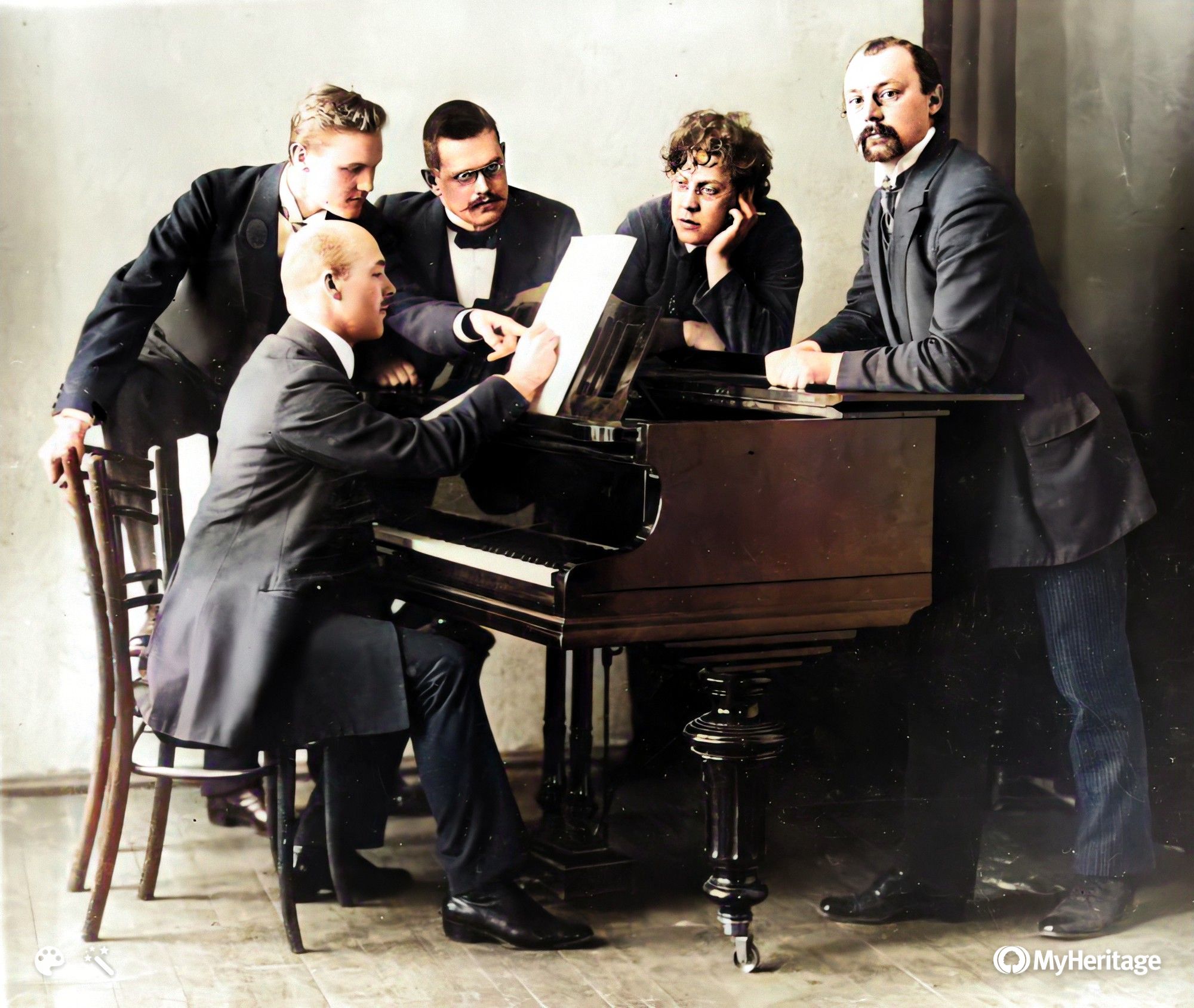 On 5th of August, 1904, Aavik summarises his expedition experience as follows:
"Those days, I came home from the journey of collecting folk tunes. I have not been able to cover more than the parishes of Halliste and Hargla. I could not leave home for a long time before Midsummer, so I collected first in Halliste. It did not yield much: after two weeks of collecting songs, I had about 25-30 melodies, most of them horn tunes or old hymns. Apart from wedding song [kaasitamine] melodies, which seem almost all similar, no one can sing other types of "secular songs" over there. In Hargla, it's a different story. There, all varieties included, I was able to write up about 100 melodies."

Sheet music of the song Palju sõnu written down by by Juhan Aavik in Hargla. Preserved in the Estonian Folklore Archives of the Estonian Literary Museum, with the reference EÜS I 802 (92)

Aavik's travel description on July 24th, 1904:
"Before lunch, I went to the Taheva manor's farm labourers' house [in Valga county, Hargla parish] in Tsirgumäe [near the Taheva manor]. Two old women, Hipp Kahr and Liis Sunts, were singing a wedding song [kaasitama]. They knew many lyrics, but the melodies weren't that much. They sang everything using mostly just the same melody. Anyway, not many melodies are known in Taheva apart from the wedding one[s]. However, they know many lyrics over there. In the afternoon, I wanted to go to Wombse farm alone (Mr Tamm could not join me since his brother had arrived on a visit with his family). I called in Taheva school to ask the young school teacher to join me. He was not at home. I did not trust to go alone, however, thinking that I would not get anything. By the evening, I went to Tamm's place."

Palju sõnu (Many words) is a wedding tune, meaning a song by the wedding singer in praise of the bride or the groom, collected on this expedition. 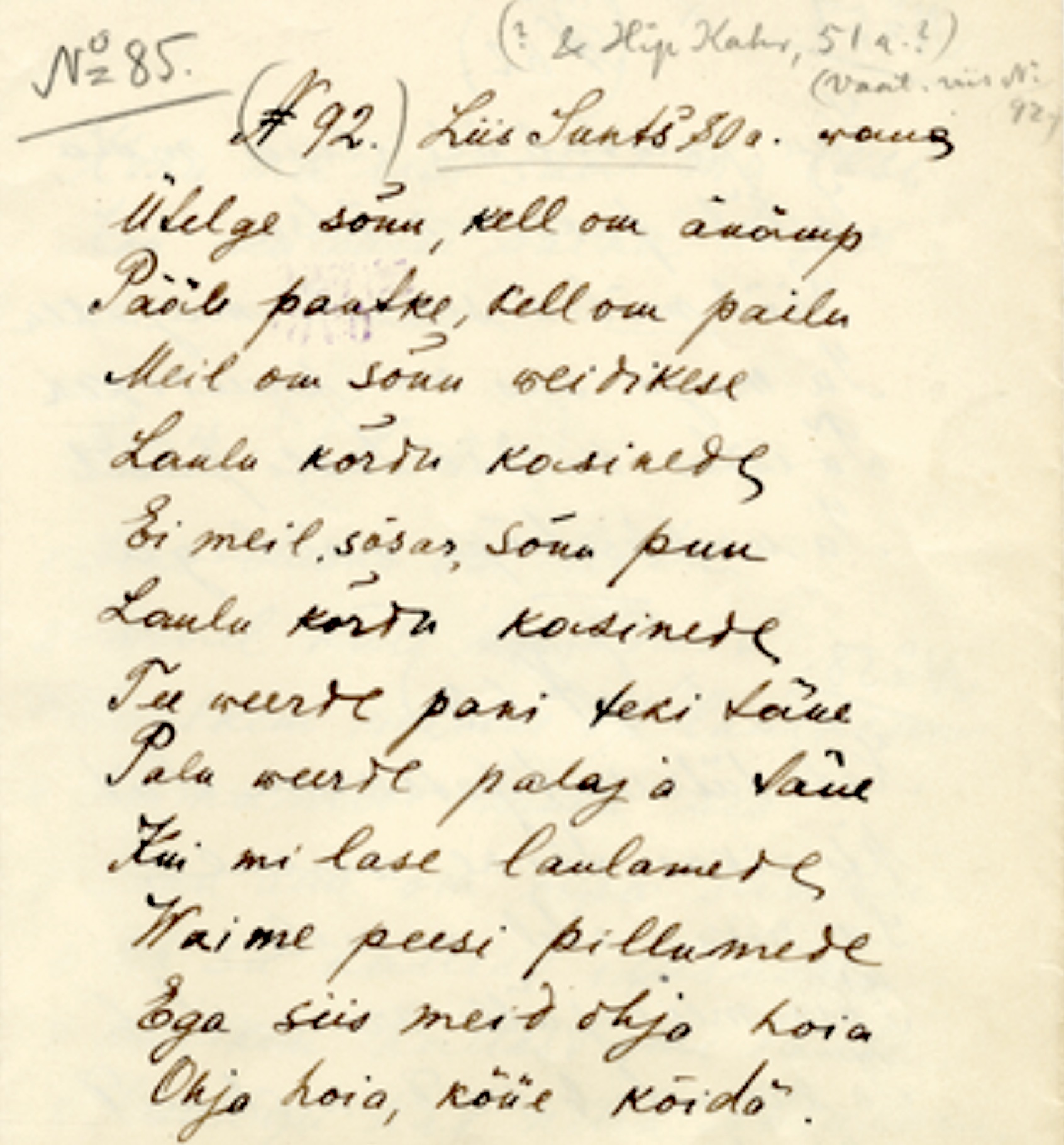 The lyrics of Palju sõnu written down by Juhan Aavik in Hargla. Estonian Folklore Archives of the Literary Museum, fund reference EÜS I 768 (92)

Publications of the song

The song Palju sõnu (Many words) written down by Aavik is now held in the Estonian Folklore Archives of the Estonian Literary Museum. Herbert Tampere also included it in his collection "Anthology of Estonian Folk Songs. I" (no. 83, p. 91) and in 1960 in the collection "Estonian Folk Songs with melodies II" (no. 83, p. 355). After that, it has been published in several other collections of runic songs, as well as in the interactive book of runic songs "Tarõ taivahe" among the songs from Võrumaa county. 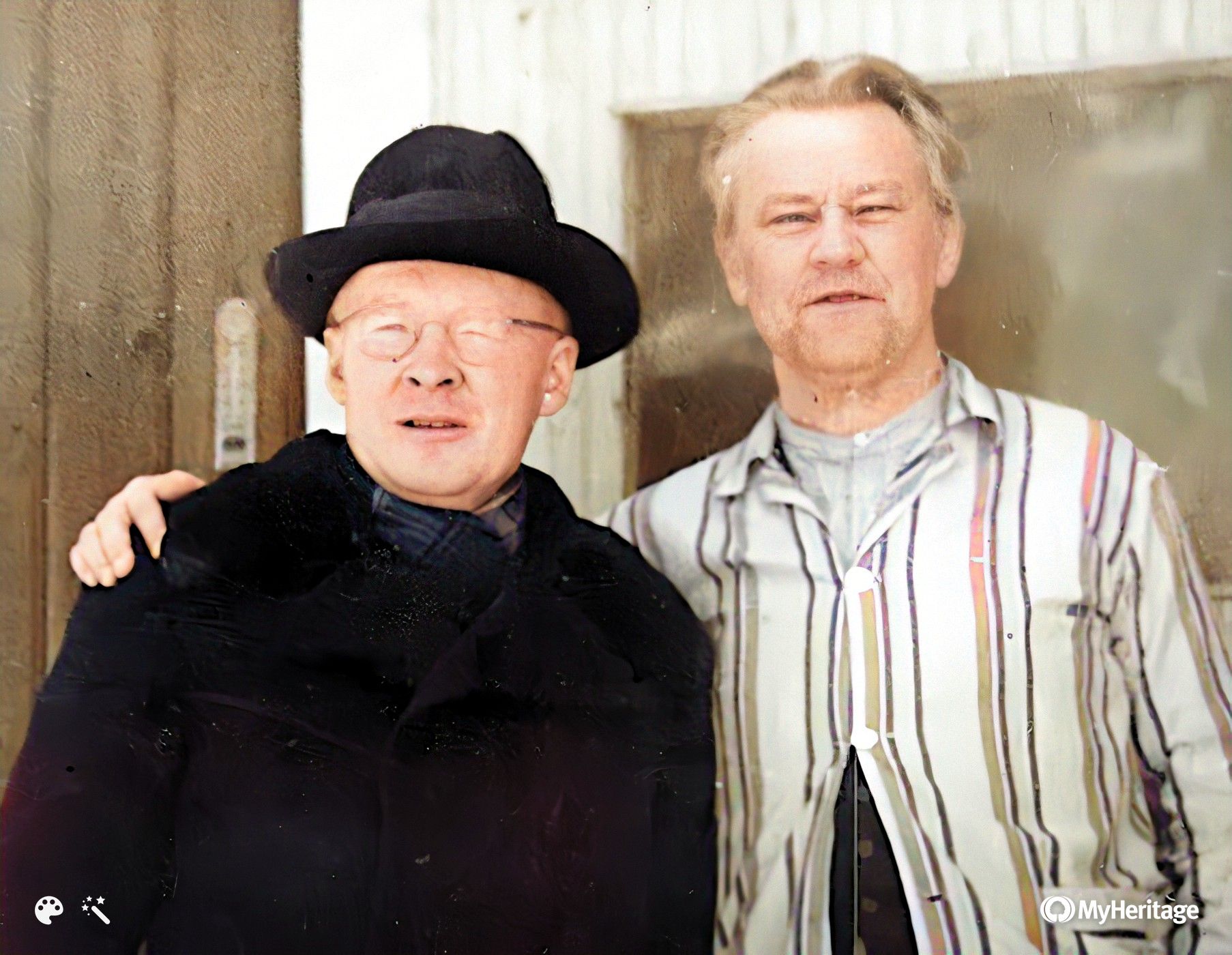 Juhan Aavik's compositions are very diverse in genre but mainly based on folk melodies. One of his best-known works is the choral song Hoia, jumal, Eestit (God protect Estonia). On January 30th, 1944, Herbert Tampere wrote a whole article about Juhan Aavik as a collector of Estonian folk songs in the newspaper Postimees: "We can undoubtedly consider Juhan Aavik as one of the most prominent pioneers of the national trend in the development of Estonian sound art. Perhaps a significant influence for this has been his direct exposure to folklore during his susceptible youth." The full article can be read here (in Estonian). We can even listen to Aavik's own account about how he became a musician: listen to the recording from 1964 (in Estonian). You can read more about his childhood and life in the newspaper Sakala (January 29, 1944, No. 16, in Estonian) and on the website of the Estonian Music Information Center.

Palju sõnu is an exciting song since its chorus is using "branching" polyphony. While polyphony of the Setu region is widely known, the area in Valga County where polyphony was also used, less so. Branching polyphonic refrains are characteristic of the Hargla region and have probably arrived there from northern Latvia. This has been analyzed by Urve Lippus in the article "Two-voice Songs in Southern Estonia" (Teater. Muusika. Kino. No 7. 1987. Page 31). The article also cites Palju sõnu as one example of a song with branching polyphony.

As for the singers of the song noted down by Aavik, not much is known about them. They are probably Liis Tsunds (born Lipp, in 1826), a widow living in Essemäe, Taheva, and died in 1912 at the age of 86, and Hipp Kahr (born Paltsepp), who lived near Korkuna and was born in 1855. According to geni.com, both have living descendants up to this day.

Palju sõnu has previously been performed by the Estonian folk music ensemble Leegajus, active from 1971 to 1995. Regarding newer groups, Vägilased has performed a version at their concerts. They did not produce a recording of the song, but a live performance version can be found on YouTube. It was probably through their version that we discovered Palju sõnu.

The Estonian composer Veljo Tormis has used the song Palju sõnu in his mixed choir song cycle "17 eesti pulmalaulu" (17 Estonian Wedding Songs, 1988), which has been performed by many choirs. A YouTube version of the arrangement from 2018 by the Tormis Quartet is available here.

Palju sõnu is a song full of strength and energy. Creating our own arrangement of it was quite a long process. At the end of 2018, Sulev came up with the piano melody that starts off our version and is repeated throughout the song. However, the arrangement did not take its final shape until two years later.

Linnuk frontpage | Read about next song